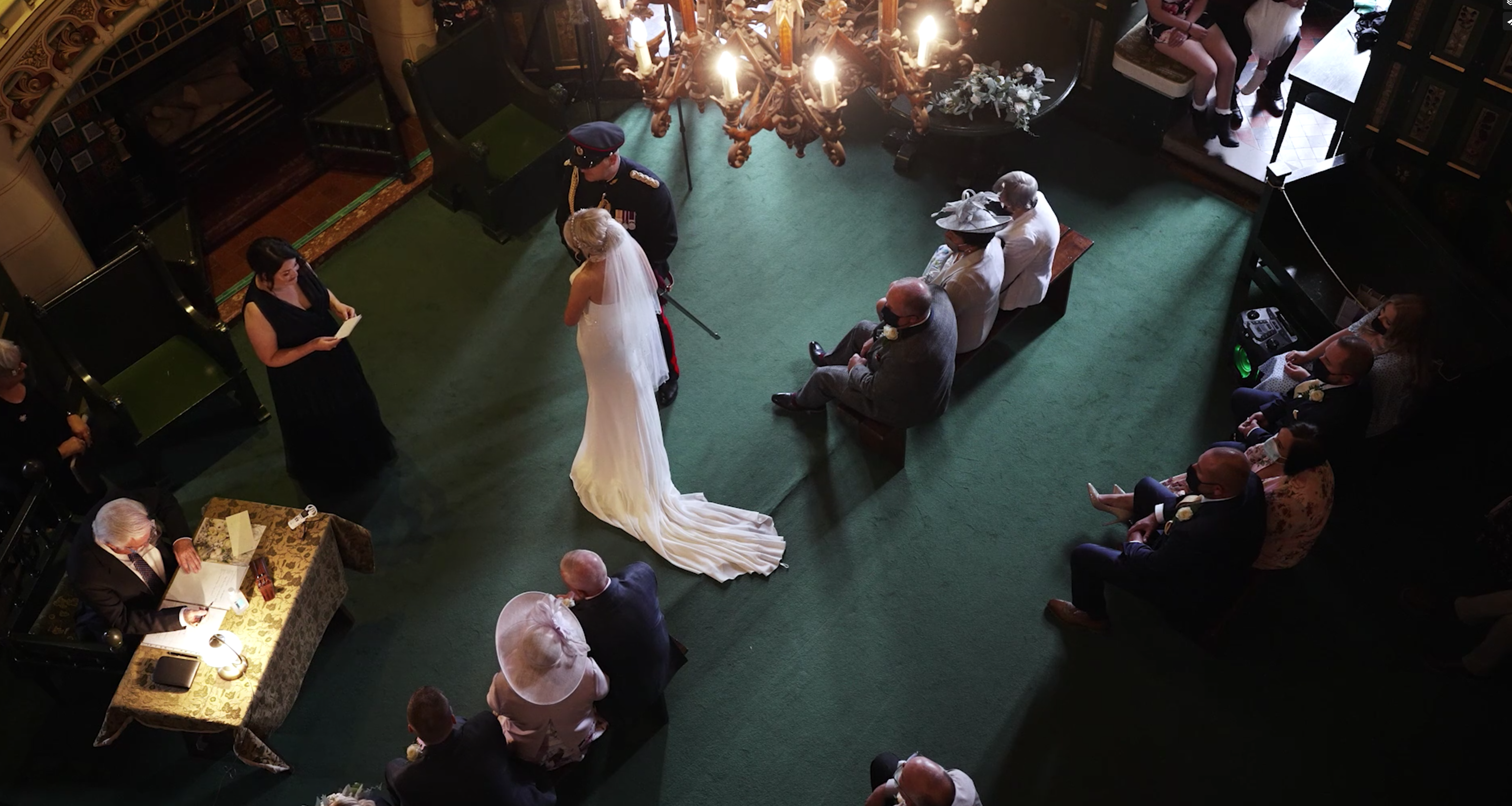 How did you meet?

What’s important to you as a couple?

Quality time together (as we don’t get much of it due to our careers!!) and with our dog Teegan. Sundays together (sometimes our only time!!) Adventures, common goals and our careers.

What do you love doing together?

Walks with Teegan. Date nights, traveling, discovering new places, and getting really into a good mystery series that we can’t stop talking about.

Tell us about the proposal?

Rhys proposed on one knee on a small bridge over a stream in our most precious country park Porthkerry whilst walking Teegan. It was just the three of us and very personal.

Why did you choose the wedding venue?

Castell Coch was a place that meant a lot to us both as children. My Gramps used to tell me it was Sleeping Beauty’s Castle and Rhys always used to see it in the hill and want to get married there one day.

Why did you choose us to film your wedding?

You were recommended and we love the style of your work. It feels magical and romantic.

Our grandparents are elderly so it’s really important that we capture them to hold onto those memories forever.
Rhys’ nan (Betty) will only be at the castle ceremony – not the meal.
We have 3 readings in the ceremony.
It’s so important to Lorna to capture her and her dad walking down the aisle to Rhys.
And walking through the guard of Honour when they stand to attention for her and her dad.

Fairy-tale castle was a plaything for the rich and powerful

What happens when a patron of unlimited wealth meets an architect of boundless imagination? Here’s your answer.

Castell Coch, or the ‘Red Castle’, rises up from the ancient beech woods of Fforest Fawr like a vision from a fairy tale. Yet these great towers with their unmistakable conical roofs only hint at the splendor within.

Given free rein by the third Marquess of Bute, architect William Burges didn’t hold back. The highly decorated interiors and rich furnishings of Castell Coch make it a dazzling masterpiece of the High Victorian era.

But it’s no exotic folly. Underneath the mock-medieval trappings, you can still trace the impressive remains of a 13th-century castle, once used as a hunting lodge by the ruthless Marcher lord Gilbert de Clare.

Castell Coch has been a plaything of the rich and powerful for over 700 years. Having lavished huge sums on it neither Gilbert de Clare nor the Marquess of Bute spent much time here.

But it remains a magnificent vision of an imaginary medieval world – regularly voted by the public as their favorite building in Wales.

The third Marquess of Bute inherited his family’s vast estate as an infant and, by the time he left Oxford, was reputed to be the richest man in the world. Not to mention one of Britain’s most eligible bachelors.

Architect and designer William Burges couldn’t compete with these riches but he was comfortable enough – the son of a highly successful civil engineer whose firm was famous for building the embankment at Westminster.

The two men, who met in 1865, were very different. Bute was serious and reclusive, Burges dashing and sociable. But they bonded over a shared love of medieval art and architecture.

The marquess’s vast wealth may have had something to do with it too. Within a year of their first meeting Burges had written a report explaining how Cardiff Castle could be improved with a tower and excavated moat garden.

For Burges this was the commission of a lifetime – the chance to release his genius on a vast project for the richest aristocrat in Britain. Work began the instant after the marquess came of age in 1868.

Just three years later Burges turned his attention to Castell Coch. He suggested two possible courses of action. Number one – leave the ruins as they were. Number two – restore them ‘as a country residence for occasional occupation in the summer’.

It was never in doubt. The marquess was obsessed. Burges set about creating a magnificent medieval fantasy built around the two great towers and lofty hall of Gilbert de Clare’s 13th-century fortress.

He rebuilt the gatehouse, raised the height of the towers and equipped them with conical roofs topped with copper-gilt weathervanes. He installed a wall-walk and a timber fighting gallery.

But this authentic recreation still came with all mod cons, including central heating.

There was even a metal bell-pull for visitors to tug – not something the warlike Gilbert de Clare would have recognised.

When Burges died suddenly in 1881 only the banqueting hall had been fully decorated and furnished. It was left to a team of craftspeople to complete the most opulent rooms, including the incredible vaulted drawing room.

Gradually Burges’s Gothic Revival style was replaced by sensual portraits of the natural world, influenced by the newly popular Aesthetic Movement. It wasn’t always to the marquess’s taste. In fact he complained that the painted monkeys cavorting above his wife’s bed were too ‘lascivious’.

But perhaps it was just that the fun had gone out of the project since the death of William Burges. There is no record of him staying at Castell Coch after 1881 and some of the rooms were never even finished.

It gradually fell into disuse and was requisitioned for British and American troops during the Second World War – surely one of the world’s most extravagant barracks. Since then it’s entered another life as a much-loved national treasure, film and television star and highly popular wedding venue. More than 60 couples a year tie the knot surrounded by the gorgeous flowing imagery of the drawing room.

How cute are these table names - the couples favou

We’re so happy the sun is finally shining! Yey s

Hannah and Tom had an epic sunset in April. If it

Hedsor house in Buckinghamshire is one of our favo

That newly wed happy face!!!!! When we got to fil

This website uses cookies to improve your experience while you navigate through the website. Out of these, the cookies that are categorized as necessary are stored on your browser as they are essential for the working of basic functionalities of the website. We also use third-party cookies that help us analyze and understand how you use this website. These cookies will be stored in your browser only with your consent. You also have the option to opt-out of these cookies. But opting out of some of these cookies may affect your browsing experience.
Necessary Always Enabled
Necessary cookies are absolutely essential for the website to function properly. This category only includes cookies that ensures basic functionalities and security features of the website. These cookies do not store any personal information.
Non-necessary
Any cookies that may not be particularly necessary for the website to function and is used specifically to collect user personal data via analytics, ads, other embedded contents are termed as non-necessary cookies. It is mandatory to procure user consent prior to running these cookies on your website.
SAVE & ACCEPT